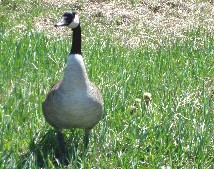 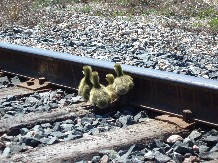 One Sunday afternoon in the middle of May, we came upon Wilma and Wilbur with two goslings. They were about 30 yards from the railroad tracks. After offering them grain, we wandered up to the tracks to feed a goose who was standing on the line. We found four goslings huddled beside her. As we approached, the goose flew a short distance away. We wondered if she was their Mom.  However, we couldn't very well leave the goslings on the tracks as trains rumble down the tracks fairly often so we picked them up and deposited them upon the grass a short distance away. We decided to wait around for their parents to claim them. The area around the railroad tracks is a popular nesting site for geese because the depressions on both sides of the tracks fill with snow melt in the spring, creating a lovely marsh for the geese. 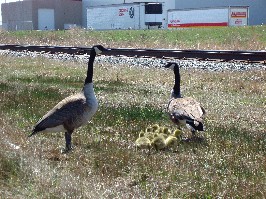 Soon, Wilma and Wilbur headed our way with their two goslings in tow and our four orphans rapidly joined their siblings. Success! We offered them cracked corn and thought that was the end of the story. 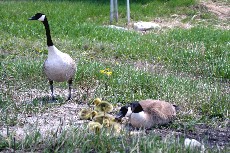 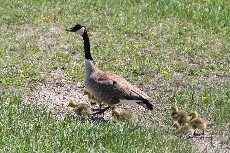 We were about to leave when Wilma got up, followed closely by her goslings.  Wilbur was trying to get a bite of corn but Wilma was shaking her head rapidly and impatiently, and uttering soft grunts. She wanted to go. 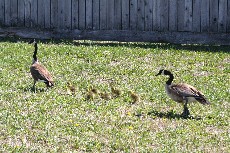 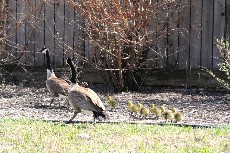 Wilbur rushed to bring up the rear while Wilma purposefully led her family past the residential fence line, through grass and mulched flower beds. We wondered if they were heading to the park pond, which was about a half mile from the end of the railroad tracks. We decided to tag along to find out. 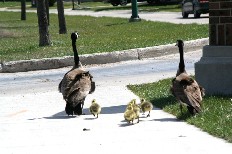 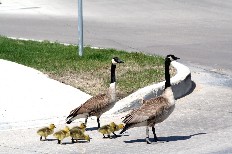 Within about ten minutes, the family had reached the end of the block. Wilma and Wilbur stood on the corner facing two streets. They appeared to think about the next step as they scanned the area. 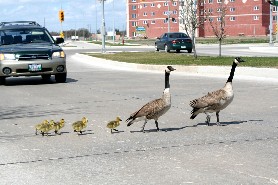 They decided to cross the street and were only a few steps onto the road when cars drove up. Backing up, they led their goslings to the safety of the curb. Another car drove up as they were about to cross and again, they backed up. However, this car remained stopped for them and they realized it was safe to cross and so they did. Arriving at the curb presented a hurdle for the goslings, who were too tiny to clamber up. At this point, we rushed to pick them up and deposit them with their parents, who hissed and threatened us with outstretched wings. 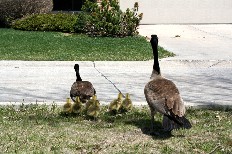 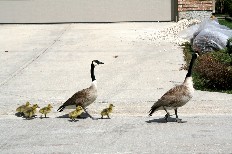 Then it was off the curb and a walk along homes on a side street. 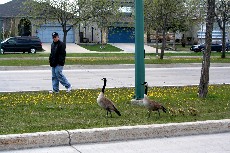 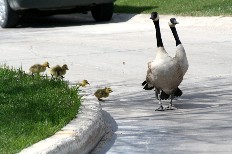 And it was up on a curb again and a walk down a grassy median with Earl staying close to the edge to prevent them from going onto the street. And, of course, another spring off the curb for the goslings who had to be terribly tired by now. They'd walked and clambered up curbs and sprung off curbs non-stop with their parents for twenty minutes and they were only a day old. 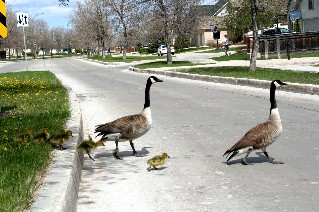 At last - the final curb to get off! One of their goslings take a flying leap off the curb. Flying comes naturally to geese... 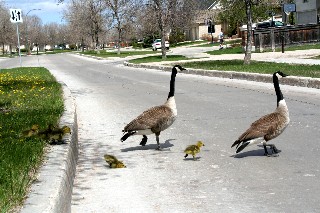 Alas, landing does not, as all goslings and fledglings learn as this gosling lands on its little neck! OUCH! 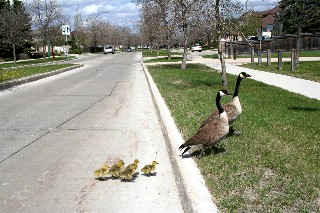 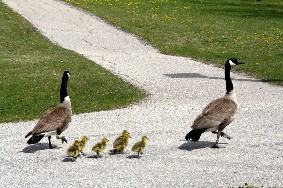 Wilma and Wilbur begin honking with excitement as the pond comes into view. They trot, picking up speed as the water approaches. 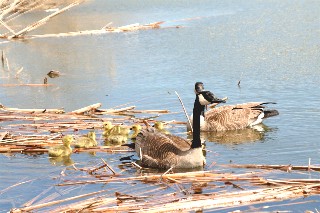 We could almost hear Wilma and Wilbur sigh with relief when they got on the water with their children. The long, difficult and at times, dangerous journey had come to a satisfying end.

We wish we could end this story happily but Wilma and Wilbur lost their goslings to gang brood parents shortly after their arrival at the pond. We have not seen them since the day we accompanied them to the pond.