THE GEESE OF SILVER LAKE

Canada Geese: Fine Feathered Friends by Pauline E Kelly is sure to delight lovers of Canada geese who enjoy an easy-reading non-technical book. 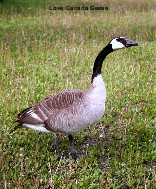 When we met The White Wings in September 2004, White Wing was the most striking gander in the park because of his unusual white wing tips. He also had a unique high-pitched two-syllable call that had a questioning quality to it. 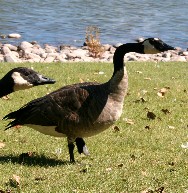 White Wing without his white wing tips Aug 2005. His wife is beside him.

The White Wings  returned in 2005 but did not nest, perhaps because they were not old enough. They flew to a molting location in the summer. When they returned August 20, 2005, White Wing had molted off his beautiful white wing tips! However, we recognized him from his head markings,  his unique call, and his behavior. We also compared his photos in order to properly identify him and sure enough, he was the same White Wing -- minus his striking wing tips! Earl began to call him "the gander formerly known as White Wing!"

White Wing has always been an extremely reserved gander, keeping a safe distance from us when we approach. He is also rather high-strung, rarely standing still for any length of time. He always seems to have something to say about everything and is heard constantly talking at the top of his voice! 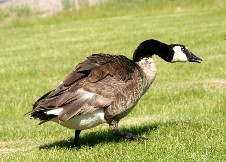 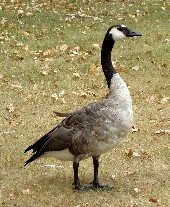 The White Wings showed up at the park pond at the end of May, 2006, with White Wing looking all beat-up. His tail was raggedy and he'd lost quite a number of feathers. Non-breeding geese do not begin molting until mid-June so we came to the conclusion that poor White Wing had been involved in a vicious fight with another gander. Due to the sorry condition of his feathers, he wasn't able to fly. Therefore, he and his wife were unable to fly to their usual molting location and had to molt at the park. We were extremely concerned about him and hoped he'd grow a new set of feathers after the molt.

Thankfully, that happened and he was sporting brand new feathers and looking handsome again by the end of July.

The White Wings must have been anxious to test their new feathers because they left the park August 4 and stayed away for 20 days.

Due to an unusually cold October, many geese have migrated. The White Wings left for the south October 21, 2006.

We have not seen White Wing since October 2006.