The true tale of a Courageous Cape Cod Canada Goose.

HOW WE IDENTIFY OUR GEESE

Often when we meet people in the park, we introduce them to our geese by name. They always appear stunned that we can recognize unbanded geese.

"How do you do that?" they often ask.

When you bond with geese or any other creature, you will realize that they don't all look alike. Every goose is a unique individual with his/ her own distinct look and personality.

To begin with, male Canada geese (ganders) are usually larger and more muscular than female geese(geese). Some ganders are twice the size of their mates.

Often with pairs, the ganders hold their necks up in an erect fashion while their females have their heads lowered in an S-pattern. 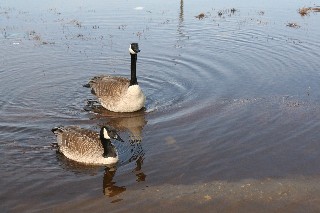 The gander has his head held high; his wife has her head lowered in an S-shape.

Mated couples talk by alternating their honks and hinks in such a rapid chatter that it sounds as if only one is talking. You have to listen carefully to distinguish between the gander and the goose. Ganders usually have lower, deeper tones while geese have higher pitched, more staccato notes.

Every goose has a unique white facial pattern, like the fingerprints on your hand.

Every goose also has his/her individual personality, just like your pets, family or friends. When you hang out with them, you learn their different personalities, each individual and unique. Some geese are shy; others are aggressive. Some are loud; others are quiet. Some rush about like running backs or battle tanks; others move gracefully, with head held high. Some greet us with trumpeting honks; others with higher pitched a-whonks. Some others may greet us with a certain call pattern that we learn to recognize over time.

Some geese have striking identifying marks.  When we first met White Wing, he had the most unique white wing tips we ever saw. When he spread his wings, his white wing tips created a magnificent pattern. Thankfully, we photographed White Wing a lot because he molted away his white wing tips the following year but we were still able to recognize him by his facial markings, his reserved behavior and his unique voice.

Black Cheek, who is the four-year old daughter of The Franks, has black pimples on her white right cheek. She is the only goose we have seen with such a unique marking.

Banded geese are obviously easy to identify because of the bands they wear on their legs or necks. It is not our preferred method of identification as the presence of the band takes away from our more personal method of identification. Bands can fall off as well and if you can only identify a goose by the band it wears, you will have a hard time identifying it when it loses its band.