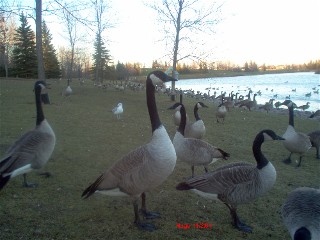 We met Hugo and his mate at the same nesting site where we befriended 86P. 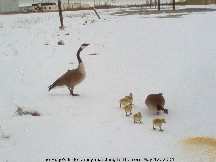 The photo above was taken the day after a snowstorm blanketed the city in May, 2004. Hugo led his merry gang out to meet us despite the snow.

We named him Hugo because he was the largest goose in the Hobo (they were nesting along a railroad track) nesting grounds.  He was also one of the friendliest, coming up to us and proudly showing off his five goslings when they hatched.

Most of the parents who had successful families at the nest site departed for brooding grounds soon after their goslings hatched but The Hugos raised their goslings at the nest site until they were a month old. Construction began in earnest at the nearby mall where they were raising their young and one day, we watched a large flock of month old goslings fleeing in absolute fright when tractors stormed through the nest site, unearthing their marsh. The next day, there wasn't a single goose or gosling in sight and The Hugos vanished from the area as well.

We searched for them in neighboring ponds but they were nowhere in sight. Two weeks after the frightful incident at the nest site, they showed up at our park pond. We feel that they were fairly young and inexperienced because it had taken them two whole weeks to find their way to the park pond!

The Hugos raised their goslings successfully and migrated south that year. Sadly, we have not seen them since. We still look for Hugo, our big, strong, and friendly gander. We see him and his family trotting about in the snow and swimming on the marsh. We remember rescuing their goslings from a newly dug hole at their nest site.