Nobel Prize laureate's HERE AM I, WHERE ARE YOU?

This book takes you into the wonderful world of geese!

The true tale of a Courageous Cape Cod Canada Goose. 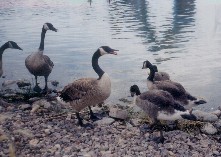 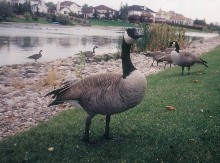 Harriet was the goose who won our hearts and showed us the beauty and wonder of Canada Geese.

We met Harriet in June, 2003, when she was a single mother to her four goslings, whom we named Hewie, Lewie, Dewie and Flewie. Harriet stood out from the hundred plus geese in the park because her goslings were the youngest and she was the only single parent in the park. All the other goslings were gawky runaway rambuncious bundles of energy while hers were fluffy golden yellow peeping palmfuls. She had to single-handedly raise her goslings without the added protection of a gander. We named her Harriet because she was a harried mother, constantly rushing off other geese who wandered too close to her babies.

When Harriet's goslings were about 6 weeks old, she met a lone gander. This gander was a wimp in our eyes. He was afraid to get too close to Harriet's family and her goslings hissed at him and chased him away! We told Harriet many times that she was too good for the likes of him. However, he was persistent and hovered around her, staying a safe distance from the family at first, but gradually closing the gap and becoming almost a member of the family. We nicknamed him The Suitor.

About ten days later, we were surprised to be met by Harriet walking side-by-side with The Suitor. We scolded Harriet, informing her in no uncertain terms that The Suitor would let her and her family down and that she needed to find a better man. Harriet cocked her head to one side; she appeared to be listening intently to us. As soon as we were done, however, she rejoined The Suitor.

A few days later, The Suitor got into a ferocious battle with another gander who approached Harriet. We didn't think The Suitor would win this battle but he surprised us by not only beating his rival but forcing him off the pond! He then sounded a victory honk and raced to Harriet's side with his neck outstretched and his tongue wagging. Harriet and her goslings stretched their necks out toward him, honking their congratulations to him. He faced Harriet, stood tall and proudly spread his wings while she weaved her neck toward him. We broke out in applause. He was officially Harriet's man. They were engaged.

The Suitor began to behave like the man of the family, leading Harriet's goslings while she brought up the rear. Harriet appeared to be happier and calmer now that her family was complete. His presence allowed her to relax a little so she became a little less harried.

Within a couple of weeks, we began to identify The Suitor's greeting call. He had a melodic and rhythmic pattern that was unique and identifiable even when there were thousands of geese in the park in the fall. Because of his unique honks, we named him Hank.

The world seemed rosy and perfect. Then, the hunting season began. One day in early October, Harriet vanished. That day, Hank and her goslings behaved differently toward us. They appeared withdrawn, as if suffering from shock. We looked for Harriet all over the park and even at neighboring parks and ponds but she was no where in sight and Hank and her goslings greeted us without her. We grieved for our beloved Harriet, our loving sweet single mother goose who had raised her goslings with so much love and brought us happiness and allowed us to enter her special world.

Later in October, another goose showed up with Hank but it wasn't Harriet. This goose was larger than Harriet, who was small and petite and had a nail-sized hole in one of her webbed feet. We couldn't figure out who it was and what it was doing with Hank. It is possible that the goose was Hank's family, perhaps a sibling. Hank and this new goose led Harriet's goslings south late in October after a snowstorm.