Canada Geese: Fine Feathered Friends by Pauline E Kelly is sure to delight lovers of Canada geese who enjoy an easy-reading, non-technical book. 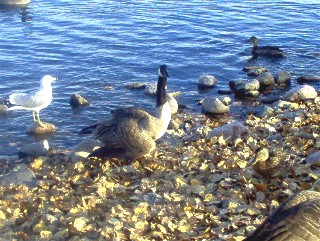 We spotted Gabriel in mid-September, 2004 among the thousands of migrating geese in our park. Something was obviously wrong with his right wing, which he was dragging around. We named him Gabriel because he looked like an angel with his drooping wing.

At that time, we didn't have enough experience to know about wing injuries but we knew we had to help him. We were concerned that he would not be able to migrate south as the winters in our city are brutal, with temperatures dipping way below minus forty and the pond remaining solidly frozen for five to six months of the year.

We contacted a rehabilitator and described Gabriel's wing to them. They advised us to capture him because they feared he might have fractured his wing during a colliding with a power line. We were told that such collisions were quite common. They informed us that they had an indoor pond and Gabriel could overwinter in there until his wing was fixed. We were happy to hear that and we became even more determined to capture him.

We contacted Canadian Wildlife Service and they came out to try and help us capture Gabriel. They chased him with fishing nets and it was obvious that Gabriel could not fly. He ran into the pond and we were unable to catch him. The next day, they brought a canoe but did not manage to capture him.

Not wanting to give up, we rounded up a goose-loving friend to help us catch him. Gabriel outran us.

Meanwhile, it was early October, more than two weeks since we'd first spotted him. We knew we had to capture him before a snowstorm or we'd never catch him.

One evening, while feeding the geese at the park, we met two gentlemen and a lady and her children who had also seen Gabriel and were concerned about him. They said they'd help us catch him.

With food, we lured Gabriel away from the shore and began to chase him deeper into the park. The children were hot on his heels while we panted along, trying to keep up the pace. We had been told by the rehabbers that we had to outrun Gabriel or we'd never catch him.

With so many people chasing him, Gabriel panicked. He fell, picked himself up and ran, falling again and again. It was awful to see him fall, knowing he was terrified out of his wits. But we continued to chase him because we knew that if we quit, we'd never catch him again.

Finally, he fell and remained on the ground, his long neck stretched out, wings spread flat, eyes glazed. He was completely exhausted and in shock.

We ran up to him and talked soothingly while we covered him with a large towel. He remained still as we loaded him into the crate and didn't make a sound all the way to our house.

We were concerned that his little heart may have given out on him so we peeked in at him every minute or two. That night, Gabriel remained in our house. He perked up after an hour, stood in his crate, listening intently to the geese honking as they soared above our house on their return to the park. His appetite returned and we felt better.

We transported Gabriel to the rehabbers the next morning, feeling confident in their ability to care for him but sad to have to say goodbye to our little friend. We had grown to love him and we wanted him to be in a safe, warm place.

The next day, we contacted the rehabbers. Imagine our shock when we learned that they had euthanized him shortly after admission! They said his fracture had become calcified and they could not fix it, so he would never be able to fly again. We were torn with grief over our little friend who had suffered so much when he fractured his wing and then again when he was captured.

Few days go by when we don't think of Gabriel. He may be gone but he lives within our hearts.