HONK! HONK!
A story of Migration 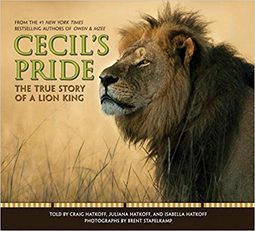 The true story of a Lion King

This story will move you to tears. 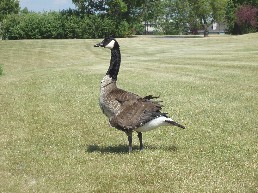 We first noticed Blake (named for his jet black head and stockinged black neck) with his drooping left wing July 2, 2006.

We observed him for a couple of days, hoping his wing was simply sprained and not broken because we had experienced a heartbreaking loss two years ago with Gabriel, a gander with a broken wing. There are no waterfowl sanctuaries in our city and all waterfowl (except endangered species) with broken wings that cannot be rehabilitated and released back to the wild are euthanized. It is incredibly difficult to fix broken wings on big birds to the point where they are able to migrate south for the winter.

After a couple of weeks, we realized Blake had a broken wing. We made inquiries to different agencies to find out if we could get him placed in a sanctuary. Fortunately, we met a new friend who loved geese. She told us about a waterfowl sanctuary in the next largest city. We contacted the sanctuary and were informed that they would accept Blake into their captive flock. They kept their flock outdoors in a fenced area during the warmer months and herded them into an indoor wintering area when the outdoor pond froze. We decided to capture Blake as soon as possible for two reasons: one, because of the long drive and two, because there would be thousands of geese in our park by September and it would be even more difficult to capture him then. 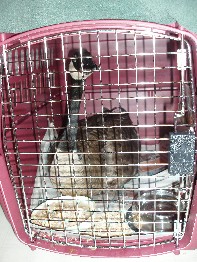 We drove Blake to the sanctuary on July 21. During the long drive, he uttered several high-pitched, plaintive honks that broke our hearts. They were sounds of distress and we knew he was feeling trapped and uncomfortable in the carrier. Canada geese are used to being wild and free and clean. We knew he desperately wanted his freedom and we knew he wanted to bathe and clean himself.

As soon as we arrived at the sanctuary, we released him and he made a bee-line for the pond! He was soon bathing himself thoroughly, dunking and rolling his body over and over in the water. It was delightful to watch him bathe himself with such abandon. He cleaned himself for a whole fifteen minutes! When he was satisfied, he began to take a swimming tour of his new home. 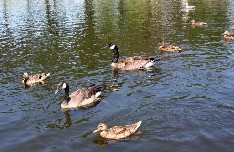 (Blake with new friends at the sanctuary)

He avoided us as much as possible, though. Every time he saw us coming up to him, he swam as far from us as he could. This was heartbreaking because he used to come right up to us. Now, he wouldn't swim anywhere near us.

We understood how he felt, though. We might have been friends at one time but we had become his captors, transporting him from a place he knew to a strange place full of strange ducks, geese, pelicans and swans.

Two days later, we said goodbye to Blake. At that time, he was still feeling like a stranger in his new home and hadn't made any friends. He would wander around the sanctuary on his own, a lonely, sad figure. And he still hadn't forgiven us and continued to avoid us. 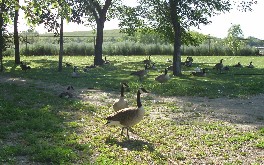 Blake (far left corner of this photo. He is standing beside a tree) with new friends at the sanctuary. Because it is open to the skies, healthy geese and ducks fly in to join the injured captive flock as there is always food inside. Sanctuary staff feed the captive flock and visitors are encouraged to feed the birds. We love the sanctuary. It is a peaceful and compassionate little haven.