Beautifully written with delightful photographs by a lady with great love for geese! 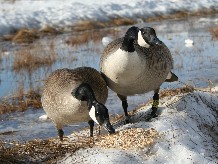 We met 86P in April, 2004 when he was doing guard-gander duty for his nesting wife. We had seen a flock of geese standing and resting on an empty lot beside a shopping mall and we decided to offer them some grain as there was still snow on the ground and very little food for them to eat.

We didn't realize most of them were ganders who were guarding their wives' nests until 86P's wife flew off her nest to land beside him and have a bite of cracked corn!

There was a huge snowstorm in mid-May. Mrs. 86P was buried in snow up to her head. Still, she remained on her nest, trying to keep her eggs/ goslings warm. Two of their goslings hatched. One died immediately and the other survived for a couple of days. We don't know what happened to it because The 86Ps showed up without it a few days later and they left the nesting site for the molting grounds immediately after.

The childless couple returned to the park in late-September, 2004.

Last year, the 86Ps were successful in their nesting attempt and had 7 goslings. Most of the other geese left the nesting site with their goslings almost immediately after hatch but the 86Ps seemed contented to raise their goslings at the nest site, which was beside a railroad track. Their goslings were about 2 weeks old when two were killed as they attempted to cross the railroad tracks. We wondered if The 86Ps realized their loss or the horror of the accident. Would they continue to raise the remainder of their goslings in such a dangerous location?

We returned to the nest site the day after the accident. The 86Ps were noticeably absent. When we visited the park pond two days later, The 86Ps were there with their five goslings. They had walked their goslings a mile to the park pond. Their actions showed us that they realized that the nesting site was a dangerous place to raise their kids and they grieved for their lost kids.

The 86Ps became gang brood parents at the park, raising their five goslings alongside thirty other goslings. They left the park July 31, 2005 when their gang brood was fully fledged and ready to explore the world.

Sadly, we have not seen 86P and his wife since that day. We remember all the joys they gave us and the memories they shared with us. We miss them dearly. The nesting site is not the same without 86P, who was the Official Greeter. We were friends with 86P and his loyal mate for two years. He was 5 years old when they vanished.

86P used to recognize us no matter where we were. He'd fly up from behind us, honking in greeting, and then extend his neck to us in friendship.

Read more about The 86Ps in BATTLE FOR NEST, GANG BROOD TURNOVER, NESTING, and GANG BROODS.